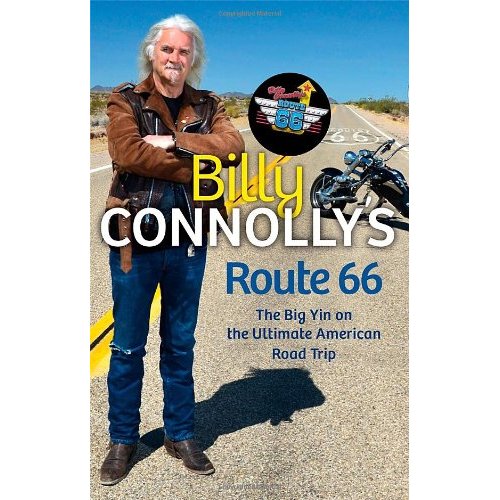 The companion book to Billy Connolly’s Route 66 ITV series is out and we read it.

(Note: if you’re interested in renting a motorcycle or a trike to explore The Mother Road yourself, or are interested in an EagleRider Route 66 Guided Tour, be sure to contact us. We’ve got the most competitive rates and would be glad to help you plan your dream trip!)

Billy Connolly’s Route 66 series on ITV received fairly mixed reviews, with some critics pointing out that the programme was too much about Billy, and not enough about The Mother Road. It’s fair criticism from anyone who’s never ridden Route 66.

But if you have ridden The Mother Road (we’ve ridden portions of it many times btw), then you know that everyone’s journey is personal; it’s different for everyone, even though we all ride the same tarmac. The feelings you take away, the things that resonate within you after riding back in time on this great road, are all very personal, moreso if you’re riding Route 66 solo. Connolly was on a trike (a 2011 Boom Lowrider Muscle, featuring a 1.6 Liter Ford motor and a VW transmission) with a film crew following along. Most of these celebrity travelogues follow a formula where every day, the star faces a personal challenge or meets a weird local, and the formula’s gotten tired.

Connolly’s journey comes across a bit less planned, a bit more spontaneous, which is refreshing because that’s what the ride would really be like for the rest of us. The best part of a journey like Route 66 is not knowing what you’ll see or who’ll you’ll meet each day, and the book does a good job of conveying that feel. Connolly does take a while to get on with it; nearly a third of the book goes by and he still hasn’t left Illinois. This is mostly because the book follows a format where the beginning of a chapter talks a bit about where Connolly’s going, then he ends at a point of interest and you get five or six pages of historical background.

The upside of this format is that a reader can use the book as a light guide for planning their own trip and be assured that they’ll see interesting things. The downside is that some of the places Connolly chooses to visit are not actually on Route 66, and require side journeys. And then there’s that “personal” thing again – you’re reading about a tour of Route 66 as seen by Billy Connolly, filtered thru his views on politics, religion, society, and what does and does not interest him. So readers should approach this book knowing that it is not a passive guide to The Mother Road – there are plenty of other books available which do a better job at this. Billy Connolly’s Route 66, The Big Yin on The Ultimate American Road Trip is his take on things. You don’t get that “you are there” feeling from this book, that’s not how it’s written. It’s more of a “he is there” style. Whether or not you’ll enjoy it depends on how much you like Billy Connolly.

One thing that was very surprising about the book, given that it was written by a comedian, is that there aren’t a lot of laughs in it. Route 66 is a road that has been dying since the 70’s, and much of the route passes through the heartland of America, plagued with tornados and destitution. There are tales of dead children, murdered service station owners, the Oklahoma City bombing, and even a visit by Connolly himself to the hospital after the throttle sticks on his trike and he breaks a rib. Not exactly light reading! Again, Connolly was relating tales from people he met on the road, and life isn’t always rainbows and sunny days. But the book would have felt a bit better balanced with more comic relief.

One of our favorite segments of Route 66 is between Kingman, Arizona and Amboy, California, which passes through the town of Oatman. This is the best bit of road for motorcyclists, especially the bit just before Oatman and just after. The majority of Route 66 is not technically challenging riding, not really twisty, but this segment undulates and you really can throw the bike around (making sure to mind the tar snakes which make traction highly unpredictable). Sadly, this portion of  Route 66 barely gets a mention in Connolly’s book (other than referring to the Oatman Highway as “infamous”). He doesn’t mention Roy’s in Amboy, which in our opinion is one of the coolest stops on The Mother Road. Given that Connolly had just left hospital with a broken rib, perhaps he just wanted to get the trip done and dusted!

In truth, the best part of Billy Connolly’s Route 66 is the interaction with the characters he meets along the way. America is a huge country – Connolly rode over 3,200 miles on this trip- and his interactions with people during the journey clearly show that most don’t fit into any convenient stereotype. Not that Billy isn’t guilty of a bit of stereotyping himself: he writes of growing to dislike people riding along Route 66 on rented Harleys, saying that they were buying into some corporate image of The Mother Road. The he goes onto talk about what a relief it was to meet fellow trike riders. FYI Billy, lots of people hire bikes to tour Route 66 because it’s a much cheaper option than shipping a bike from Europe. And the people we’ve ridden with on Route 66 do so because they’re trying to get in touch with a simpler time, and see these things before they vanish – motivations that are the antithesis of anything corporate. And Billy mate, if you’re going to slag Harleys and talk about how cool trikes are, the least you can do is not crash your three wheeler!

All in all, despite our criticisms, we really liked Billy Connolly’s Route 66 – The Big Yin on the ultimate American Road Trip. If you’re planning a ride on Route 66, it’s well worth a read. Just make sure to also get a more basic Route 66 reference guidebook, like Drew Knowles’ excellent Route 66 Adventure Handbook. And if you are planning a motorcycle trip on Route 66, be sure to contact us. We’ve got the most competitive pricing on EagleRider bike hire, guided and self guided tours.

And yes, we can arrange a trike hire for you too!