Beat the heat while motorcycle touring this summer

Tips for riding a motorcycle in extreme heat 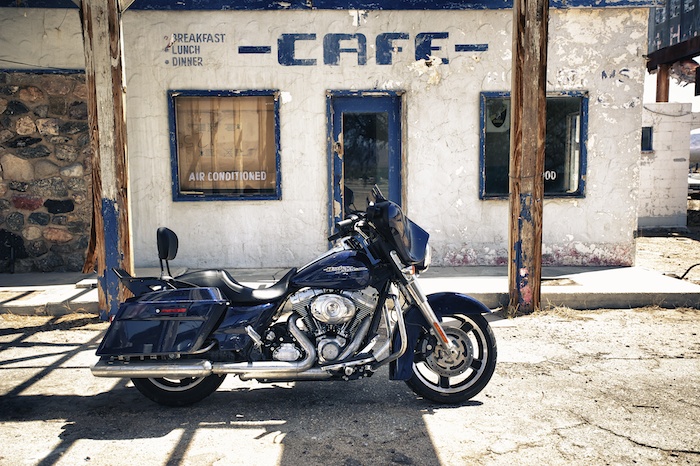 Riding down Route 66 near Amboy, California, I was finding it hard to stay awake. I was at the back of a pack of a dozen Harleys; it was early July and the midday temperature was 112 degrees. The wave of heat rising from the tarmac turned the horizon into a hallucination, imaginary skyscrapers in the distance. At the front of the pack, I saw Tim raise his hand to signal to the group that we were pulling into Roy’s, a famous and now defunct Route 66 motel. I hoped we’d find water there.

We’d been on the road for several hours, having left Las Vegas to 4:30am to get a lead on the desert sun. It was our first motorcycle tour from Sin City to the MotoGP races in Monterey, California, and we really didn’t know what to expect. Fueling up after we crossed the Hoover Dam, everyone drank plenty of water, and bought an extra liter bottle for their saddlebags.  We were all highly experienced riders, and had ridden in all kinds of weather and extreme temperatures. So the thought of riding desert roads in July was more interesting than intimidating.

How naive we were…..at 4:30am, the temperature in Vegas was already in the high 80’s. Our destination was 29 Palms, with scheduled stops in Oatman and Needles for sightseeing, fuel and water. A leisurely stop for breakfast at the excellent Mr. D’z Route 66 Diner in Kingman, AZ had us back on the road at 9am, and the pavement was already sizzling. An electronic sign outside a local bank had the temperature at 108 degrees. By the time we pulled into Needles to refuel, our group was visibly wilted. At 70 miles an hour, the wind felt like a giant hairdryer blowing straight into our faces. We were sweating out water faster than we could drink it.

Despite all the water consumption, nobody used the restrooms. I’d gulped down almost four liters of water in three hours and couldn’t fill a thimble with pee. Our bodies were working overtime to keep cool. There’s sixty miles of straight road between Amboy and 29 Palms, with little or no services available. Roy’s hadn’t been operational in at least a decade. The bikes had plenty of gas, but our personal tanks were empty. Everyone was exhausted, we were out of water, and a couple of riders looked like they were about to pass out.

Luckily, there were some roadside entrepreneurs hanging out at Roy’s, selling no name bottled water and snacks out of a cooler. Some kind soul had a garden hose snaked out to the parking lot, and we laughed and poured water down each other’s heads and backs. The water coming from it was probably 80 degrees, but compared to the ambient temperature, it felt heavenly. As we sat under the awning at Roy’s, in the shade, guzzling h20, I watched everyone slowly come back to life, and knew we’d make it to 29 Palms.

We learned a lot on that first day of riding in the desert, and completely changed the way we approach hot weather riding. Make no mistake, no matter how tough you are, no matter how experienced a rider, no matter how good your physical condition is, if you don’t respect the heat, it will knock you on your ass. We’re not Doctors, but here are some tips we use for surviving a motorcycle tour through the summer heat:

1) Watch very carefully for signs of Heat Exhaustion and Heat Stroke. Your body will send you signals that it’s having trouble with the heat, which can include cramps, nausea, headaches, extreme fatigue, flushed or pale skin, dizziness, and heavy sweating. Left unchecked, you can develop Heat Exhaustion, which is a form of mild shock. If you’re feeling these symptoms, it’s time to pull over, rehydrate, rest and recover for as long as it takes. Don’t be in a rush to get back on the bike – sometimes a rider doesn’t want to inconvenience their friends by holding things up. How long do you think a trip to the hospital will hold up the ride?

If Heat Exhaustion is allowed to develop into Heat Stroke, you’re in big trouble. Your cooling system shuts down, and body temperature can rise to as high as 105 degrees. Brain damage is possible and at the very least, you’ll likely have an erratic pulse and trouble breathing. People with Heat Stroke often pass out – not something you want to happen when you’re riding. For more tips on avoiding and recognizing Heat Exhaustion and Heat Stroke, visit the American Red Cross website here.

2) Bring more water than you think you’ll need. Water is vital for keeping the body cool, but it also is necessary for digestion, for flushing toxins out of your body, and for lubricating your joints. It also cushions your organs and tissues, so when you get dehydrated, your body just won’t work properly, things will start to shut down, and you’ll physically crash. The worst thing is that by the time you start feeling bad, you’re already in trouble, so it’s HUGELY important to stay hydrated. That means drinking plenty of water before you get on the bike, and consuming 1 liter of water every hour, especially in extreme temperatures. We try to get water that includes electrolytes (like SmartWater) to help replenish vital minerals that are lost when you sweat profusely.

3) Include stops on your route where you can cool off. One of the best ways to rejuvenate yourself is by getting out of the heat, into a cooler environment. You meet interesting people in rural convenience stores, and many have large ice freezers outside. We place our helmets in the freezers while we go inside for a cool drink. A quick stop can enable you to ride another 45 minutes even in the worst heat, so plan your ride along roads that have services and conveniences no more than 1/2 hour apart. If it’s in the 100’s and you’ve got a two hour ride before your next stop, you’re putting yourself through unnecessary misery and risk.

4) Dress properly and keep your skin covered. Seems like simple, advice, but it’s amazing how many people don’t follow it. Any areas of skin that are exposed will be much harder to cool, as the sweat will evaporate from the air rushing over it at speed. This means you’ll dehydrate faster. It may seem counterintuitive to cover yourself with clothes in the heat, but look at the Bedouins in North Africa – they’re covered head to toe. Of course, on a motorcycle you need to wear abrasion and impact resistant gear, which can be heavy. I wear a mesh ventilated textile riding suit, Tim wears a leather jacket, based on our personal preferences, but we’re always covered. In our experience, the people who are effected most by the heat are those who don’t cover themselves properly.

5) Wear a cooling vest. When temperatures rise over 90 degrees, a cooling vest is worth it’s weight in gold. Basically, it’s a vest that is filled with tiny beads that retain water. This is a much better solution that soaking your t-shirt, as cotton doesn’t retain the water and it evaporates quickly.You soak the vest, shake off extra water, then put it on under your riding jacket. The moisture forms a cooling layer next to your skin, and you feel much more comfortable. Cooling vests are as cheap as $30 and run up to $100. The more expensive vests are better quality garments, and usually don’t bloat up as much with the retained water. Our favorite cooling vest is made by Silver Eagle Outfitters, and you can order one here.

Tips for riding a motorcycle in extreme heat