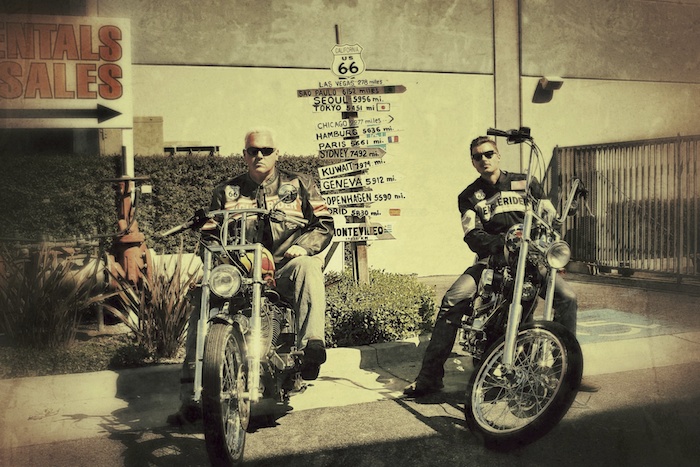 Want to get a ride on replicas of the iconic motorcycles from the classic biker flick “Easy Rider”? Here’s how you can.

Ride the Easy Rider Bikes! Ever since seeing the film “Easy Rider” for the first time, we’ve wondered what it would be like to ride the motorcycles used in the iconic film. Say the word “chopper” and most people immediately think of Fonda’s red, white and blue machine. These old-school choppers look uncompromising because they are. There are no concessions to comfort, especially on the Captain America bike, with ape hangers, forward controls and a kicked back riding position. Both bikes had tiny gas tanks with little range, and the Captain America didn’t even have a front brake! Still, who would turn down a ride on either of these bikes?

Sadly, the original bikes were lost after filming. Many replicas were built over the years by dedicated fans of the film, most to the original specifications. These bikes were mostly displayed at shows, taken out on short rides or to publicity events. You don’t really see Easy Rider replica bikes being ridden, certainly not for bike miles.

But that’s all about to change, because EagleRider commissioned updated replicas of the Easy Rider bikes, to bring along on their new Official Easy Rider Movie Guided Tour. Riders on this tour will all get a shared turn at riding both the Billy Bike and Captain America, on the very same roads the originals rode! And there’s room on the back for pillions as well. Of course, a two week tour on either of these bikes would be hard work, so riders will be on EagleRider fleet bikes for most of the tour, with a support vehicle and guides. It’s meant to be a holiday, after all!

This is the only officially licensed Easy Rider Movie tour available, and takes riders on the actual route from the film, visiting many places where key scenes were shot. Starting in Los Angeles, the tour winds across the southwest, all the way to New Orleans. In addition to riding the replica bikes, riders will enjoy a wealth of behind the scenes detail about the making of the film, and see the original locations, many of which have hardly changed since the late 60’s. Of course, the “bummer” parts of Easy Rider aren’t part of this tour, so you needn’t worry about hippie-killer rednecks!

Or contact us for more information about how to Ride the Easy Rider Bikes!