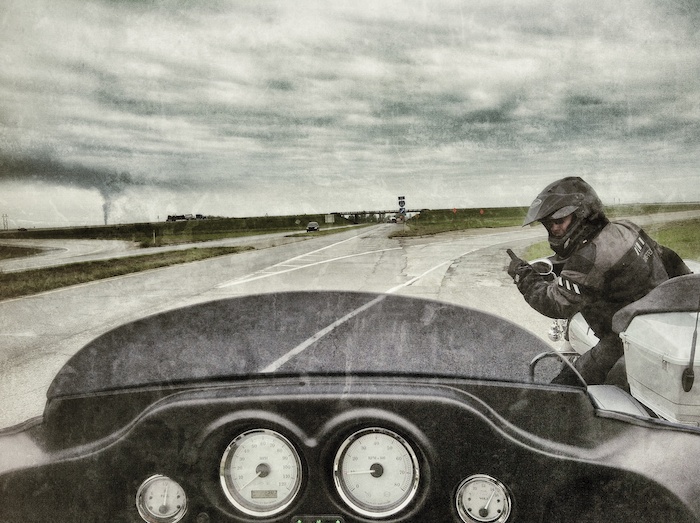 I remember it as “The Hurricane Ride”. It was August, 2008 and ten of us were headed to the inaugural Indianapolis MotoGP race. We had started in Washington DC, dodging an Atlantic hurricane that chased us off the Blue Ridge Parkway, coming down off the mountains in total darkness in the middle of the day. We’d gotten plenty wet on this tour, and we were getting tired of it. Riding in the rain is no fun, especially when you’ve got two thousand miles and two weeks of riding ahead of you. Sure, we could have taken a faster route to Indy – DC to Indy via North Carolina ain’t exactly what you’d call “economizing the miles” – but we were on a TOUR.

Midway through the ride, our next destination Louisville Kentucky, and I was leading, astride a Harley Davidson Street Glide, on an Interstate about 1/2 hour outside the city.The weather was looking dodgy, the remnants of another storm that crept up from the Gulf Of Mexico, and what started as a light drizzle soon turned into monsoon conditions. The group stretched out, visibility fell to about 50 feet, and the rain was hammering down. Lorries put their hazard blinkers on, slowed and headed for the shoulder of the road. Windshield wipers weren’t fast enough to deal with the volume of rain, nobody could see anything. We were in the fast lane, really the safest place to be as drivers started pulling over en masse.  I watched the car in front of me hitting massive puddles, and avoided them as best I could with short warning.

It was impossible to see with my face shield up. It fogged quickly and the constant stream of water was difficult to see through, so I lifted it open about an inch and let the storm in. The rain hurt my face, but I could see through the crack – until some big drops hit my contact lenses, pushing one up behind my eyeball, the other crooked to the side. Now I really could’t see, and had distracting eye pain. Taking one hand off the bar, I closed an eye and massaged it with my gloved fingertip, trying to coax the contact out from behind my eyeball. I prayed that no huge puddles would appear, that the bike wouldn’t hydroplane, that I wouldn’t be rear ended by someone who couldn’t see me.

Time slowed down and things got very quiet. I could just see our friend Mike Tye in my mirrors, steadily following at a safe distance. Where the rest of the group was, I couldn’t see. Suddenly I hit a bit puddle, with only one hand on the bars. The bike slurred to the right, I felt the rear when spinning on top of the water. I pulled my hand out of my helmet and grabbed the other bar, catching the slide with some muscle and body english. My right eye was clamped shut, the pain of the contact lodged behind my eye muted now, as a jolt of adrenaline shot through me. Somehow I kept the bike upright, and while catching my breath I saw the sign for our exit. A gap in the traffic opened up, I signaled and took the ramp, watching Mike do the same in my rear view mirrors.

At the bottom of the ramp, there were traffic lights. As we pulled up to them, the rain completely stopped. Water was dripping off of everything, it was like the moment just after a firehose is turned off. The bikes idled at the light, widening puddles beneath each as the big twins shook off the H2O. We both raised our helmet visors, gave each other frightened looks and shook our heads. Then, Mike reached over and shook my hand. We both smiled. “That’s the craziest weather I’ve ever ridden in!” he shouted. “Me too!” I agreed. We started laughing, big hearty laughs, the kind you can only get when you’re a grownup who’s done something really crazy and gotten away with it.

The rest of the group was late coming in. They’d gotten stuck behind a jackknifed trailer that blocked the road, it must have crashed just behind us. Most got over to the shoulder side of the road and waited for the rain to calm down. Sometimes riding it out means not riding for a bit. I probably would have done the same if I saw an opening to the shoulder.

But if I live to be an old man, and some young whipper snapper asks me about the best time I ever had on a bike, I know sitting at that traffic light, feeling really alive and laughing with Mike will be at the top of the list.

I doubt I’ll remember any of the sunny days.